Note about "Views" reported on this site

This Site is Monitored

Articles that are not deemed contributory are removed from this site promptly, so we would...

Please pardon our somewhat painful transition, we have been working with Subrion.com...

In keeping with recent market recording reports on million dollar plus commercial real properties it appeared that monthly sales volume increased in all categories except the Apartment category in September, 2020.  September saw increased recordings for Industrial, Retail, Office and Vacant Land.

Office / medical office sales increased in September however they are only about half of the monthly number recorded in January of 2020 while Industrial and Retail sales appeared to be near pre-COVID levels.

Data suggests that the Industrial market has seen a significant vacancy rate increase over the last few months however the average price per square foot (SF) has remained relatively stable when compared to 2019.

The office market has also seen an increased vacancy rate over the last six months however the average sales price per SF appeared to be up since 2019.  Medical office sales data indicated a similar volume decrease and price per SF increase since 2019.

The average price of vacant land per SF has increased over the last few months as the number of acres sold has dropped significantly.  The number of subdivided lot sales has however increased as demand in the residential market continues. 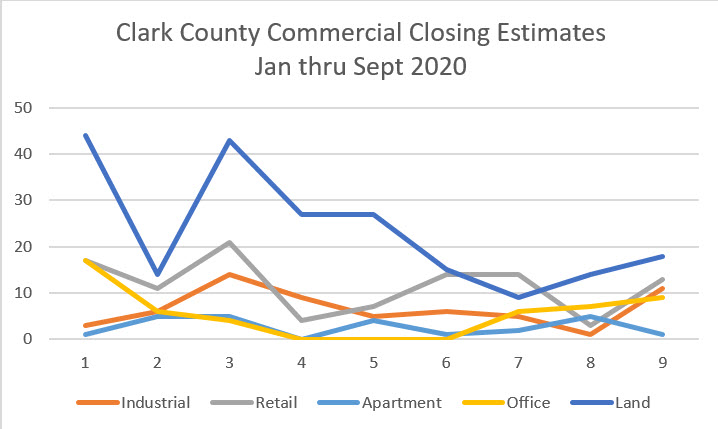 For more appraisal information contact Glenn J. Rigdon MA, IFAS, ASA who is a Las Vegas / Henderson Nevada based broker and appraiser who can be contacted via email or via his business website known as Appraiser Las Vegas  (http://www.appraiserlasvegas.com), or http://www.horizonvillageappraisal.com, or you can also click on “Contact Us” on the home page of this website or visit my public profile at LinkedIn at http://www.linkedin.com/pub/glenn-rigdon-ma-mrics-asa/1a/30b/879/

Please input letters you see on the image.
Click on image to redraw.

Please input letters you see on the image.
Click on image to redraw.

Mortgage Rates Are Going Higher, Now is the Time to Refinance

The Use of Gross versus Net Area in Appraisals